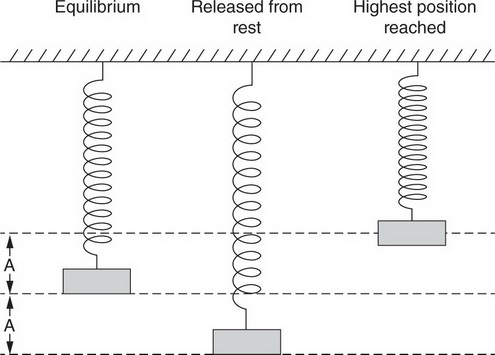 A block is attached to a vertical spring. The block is pulled down a distance A from equilibrium, as shown above, and released from rest. The block moves upward; the highest position above equilibrium reached by the mass is less than A, as shown. When the mass returns downward, how far below the equilibrium position will it reach?

B-If friction and air resistance are negligible, a mass on a spring oscillates about the equilibrium position, reaching the same maximum distance above and below. In this case, since the mass doesn't get all the way to position A at the top, mechanical energy was lost (to friction or air resistance or some nonconservative force). Thus, without some external energy input, the mass won't reach its maximum position at the bottom, either-at the bottom it will have no kinetic energy, so all the energy will be potential, and we've already established that some total mechanical energy was lost.