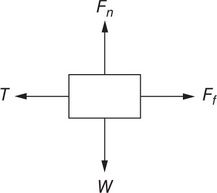 A person pulls on a string, causing a block to move to the left at a constant speed. The free body diagram shows the four forces acting on the block: the tension (T) in the string, the normal force (Fn), the weight (W), and the friction force (Ff). The coefficient of friction between the block and the table is 0.30.

Which of the following correctly ranks the four forces shown?

B-Since the block has no acceleration, left forces equal right forces, and up forces equal down forces. The equation for a force of friction is Ff = μFn. Since the coefficient of friction μ is less than 1, the friction force must be less than the normal force.