1. If a ball is rolling down an inclined plane without slipping, which force is responsible for causing its rotation?

As a ball rolls down an inclined plane, the three forces act on the ball, as shown in the diagram below. 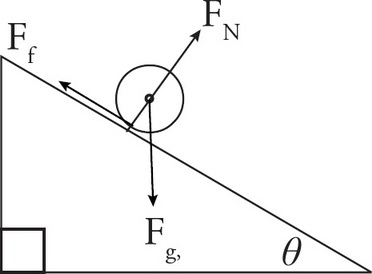 In order for a force to cause an object to rotate, the force must be located off-center, and must not point directly at or away from the object's center of mass. An object's weight always acts at its center of mass, so (B) is wrong. The normal force does act at the edge of the ball, but it points directly out of the ramp, which is straight at the center of the ball. Choice (A) is wrong. Friction acts where the ball meets the inclined plane, and it points parallel to the surface, which is tangent to the ball's surface. So friction is what causes rotation. What kind of friction do we have? The phrase "without slipping" tells us that even though the ball as a whole is moving, the spot on the ball that touches the ramp is at rest with respect to the ramp. That means we have static friction, (D).