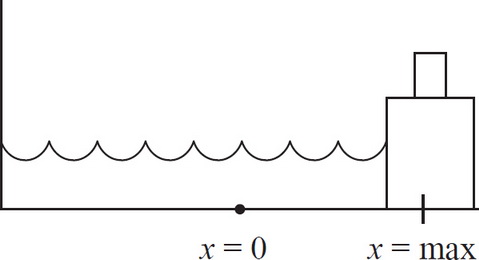 5. A spring-block system is oscillating without friction on a horizontal surface. If a second block of equal mass were placed on top of the original block at a time when the spring is at maximum compression, which of the following quantities would NOT be affected? Assume that the top block stays on the bottom block.

The frequency of a spring-block system is f =

, so it would be affected by the change in mass. Furthermore, when a spring is at maximum compression or extension, all of its energy is potential energy, which is given by U =

kx2. In adding this block, none of the relevant values are changed, so the spring will still extend to the same length, which means the amplitude is unchanged. Finally, maximum speed will be limited by the maximum K of the system (which will be unchanged since the maximum U was unchanged). K =

mv2, so the increased mass would have to be balanced by a decrease in speed to leave the K unaltered.

If you want a physical, rather than mathematical, explanation, think about the acceleration of the pair of blocks. The spring exerts the same force as before, but we effectively raised the block's mass. Thus, the acceleration is less than before. Since the distance from the starting point (maximum compression) to equilibrium is unchanged, the blocks will pick up less speed than the single block did before. Thus, maximum speed decreases.