9. A car travelling at a speed of v0 applies its brakes, skidding to a stop over a distance of x m. Assuming that the deceleration due to the brakes is constant, what would be the skidding distance of the same car if the braking were twice as effective (doubling the magnitude of deceleration)? 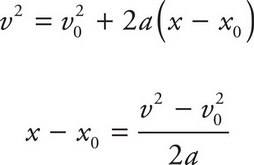 As the initial position, x0, and the final velocity, v2, are equal to 0, this equation simplifies to